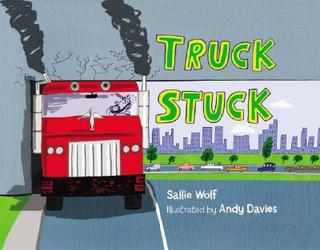 Kirkus Reviews -- December 15, 2007
Oh, no! The viaduct is too low. The big red truck gets stuck, and in no time there's a sticky traffic jam, with rubbernecking and horns honking and a virtual parade of colorful vehicles (followed a bit later by an actual parade of Boy Scouts carrying balloons). A comedy of errors ensues until a handful of helmeted traffic cops supervise the freeing of the big red truck. Wolf's rhyming text is simple but snappy, and minimal enough to be mastered by very young readers or even younger listeners. And Davies's quirky pen-and-ink illustrations should yield abundant laughter. Each vehicle (neatly identified) is a story in itself, from the long pink limousine to the exterminator's truck with the bobbing bee on top to the leaky cement mixer. A delirious age-appropriate romp.

Horn Book -- March 1, 2008
Sometimes an accident spells good luck. For the unnamed boy and girl running a lemonade stand in front of their house, a truck stuck under a nearby overpass is just such an event. Part rhyming book for new readers (though the word viaduct on the second page might be a struggle) and part humorous drama as the traffic jam builds and builds, this appealing story highlights the entrepreneurial spirit of the young protagonists. They go where the business is, whether it is delivering lemonade to the traffic cops or encouraging a stranded clown to attract customers with his balloons concession. Eventually, thanks to the girl's ingenuity, the truck is unstuck and the children celebrate with their new friends. Clipped sentences, all rhymes and phrases, tell this story of cars and trucks and things that won't go. "Let us through-we're stuck, too! Jobs to do. Recycling truck, excavator, limousine, exterminator. All stuck. Move that truck!" Stylized cartoon illustrations add to the humor. Skin tones are either ghostly white or dark brown, much the way children draw when faced with a small box of crayons. A stretch limo languishes behind an exterminator truck sporting a giant dead bee, and an Elvis lookalike sits behind the wheel of a pink convertible. Kids who are crazy about vehicles will love this one: it's easy to read and a whole lot of fun. Good luck, big truck!

School Library Journal -- February 1, 2008
A red 18-wheeler gets stuck under a viaduct and causes a huge traffic jam. Nearby, two children who have a lemonade stand observe the incident and try to keep everyone cool by selling their wares. The police arrive and so does a tow truck, but it is too small. The traffic jam gets worse and tempers flare. The hubbub attracts news crews who interview the truck driver, and a clown hands out balloons. Eventually, a huge tow truck arrives and, after the air has been let out of the semi's tires, the road is cleared for traffic to resume just in time, because the children are out of lemonade. The bright, flat, cartoon art brings the minimal rhyming text to life and really tells the story. "Traffic cops. Whistles blow." The illustration shows the children pouring lemonade, car horns blowing, a driver losing his temper, a dog barking, police directing traffic, and a tow truck backing up. This is an excellent choice to share with youngsters, who can observe the action and name all the objects and the activities. It can also be "picture read," giving children practice in their narrative skills. --Linda Staskus, Parma Regional Library, OH


Planet Esme -- March 4, 2008
Somewhere along your travels you may have seen a truck with a driver that has not properly estimated the height of a viaduct. I know that my first, sad thought whenever I see this situation is, "oh, dear, somebody is losing his job today." The author looked at this same situation, and saw inspiration. Not just another "truck book," this story manages to have true drama and excitement conveyed through pert and perfect rhymes ('Traffic cops./Whistles blow./Try to tow./No go."), offering some solid sight-word vocabulary for emergent readers. Clearly drawn, cartoonish artwork has lots of color, comedy and dramatic swirling smoke to add to the fray, plus the car line-ups depicted are charmingly akin to the "parades" I've seen little boys create across kitchen floors. With plenty to point at and laugh at, this book is going to be an action-packed favorite that, like Richard Scarry's CARS AND TRUCKS AND THINGS THAT GO, bears repeated reading. Best of all, we find out how such trucks really do get unstuck. I've always wondered!

Jen Robinson's Book Page -- June 2, 2008
Truck Stuck, written by Sallie Wolf and illustrated by Andy Robert Davies, is the story of what happens when a red truck gets completely stuck underneath an overpass, blocking traffic in both directions and stymieing both the driver and the local authorities. Two resourceful children, lucky enough to have a lemonade stand set up right by the site of the incident, save the day.

In her review, Esme Raji Codell said: "With plenty to point at and laugh at, this book is going to be an action-packed favorite that, like Richard Scarry's CARS AND TRUCKS AND THINGS THAT GO, bears repeated reading." I agree. The progression of different types of vehicles that are blocked by the truck, from a wood chipper to a pink convertible, is sure to entertain young readers. There are quite a range of people, too, most of whom visit the two children at their lemonade stand, including an apparent Elvis impersonator and a cowboy with a guitar. Eventually, the whole thing turns into a big party, also the tiniest bit reminiscent of To Think That I Saw it on Mulberry Street. And of course it's a wonderful thing for kids to see that children can solve the problem, with a realistically kid-friendly solution.

Most of the words are simple, concrete words that young children will recognize, but Wolf does throw in the word "Hullabaloo" in pleasing fashion. This is a book that adults won't mind reading and re-reading aloud. The text is well-integrated with the illustrations, too.

The illustrations (pen and ink with digital manipulation) have lots of detail to reward close examination by young readers. For example, the truck has a hood ornament that is reminiscent of a statue on the prow of a ship, a cross between bird, angel, and woman. And when the truck first blocks the road, everyone looks irritated, even the sculpted bee atop the exterminator's truck, and the clown driving a delivery van. Every time I flip through the pages, I find something else to enjoy in the pictures, like the joyful little old lady throwing her cane up in the air with joy when the truck becomes unstuck, and the traffic cop with bright yellow pigtails that curve upward, with echoes of Pippi Longstocking.

All in all, this is a bright, fun book that would be an excellent addition to any pre-schooler's shelf. Highly recommended.

The Robin Makes A Laughing Sound: A Birder’s Journal
Bird poetry, observations, sketches and watercolors are presented in a journal-style format, organized by the seasons.

Truck Stuck
A traffic jam created by a stuck truck turns into a block party.

Peter's Trucks
Peter asks each truck driver he meets what is in the truck until he finds what he is looking for.